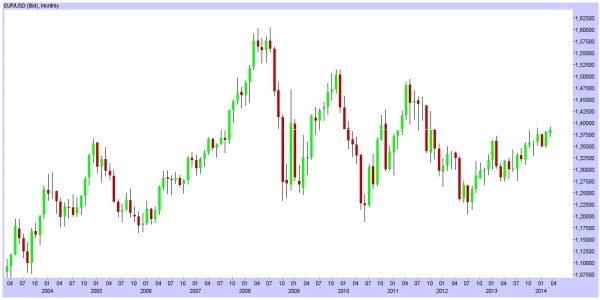 The “Session” is the period of time that you choose for the Candles: so if, for example, we choose the 15 minutes Timeframe for each candle, it means that each Candle on the Chart will represent 15 minutes of trades; going on withe the example, it means that from the analysis of a Candle, we can know the High and the Low in prices during the 15 minutes of trades and also the initial Price (Opening Price) and the final Price (Closing Price): with all these information, we can better understand the movements of the Prices. Of course, there are different timeframes for the Candles among which you can choose (From seconds to minutes, from hours to days, weeks or months).

Each Candle has the following four features, as you have seen from the previous image:

In our examples on the website, we use the pairs “White/Black” to show a Rise or a Decline in prices.

On our website we explain the most important Candlestick Patterns and we also give to the Patterns a rating depending on their reliability and frequency with which they “appear” on the Charts. Now we are going to explain to you how you have to interpret our ratings with an example:

This is the alphabetical order used for the ratings: each letter corresponds to a value.