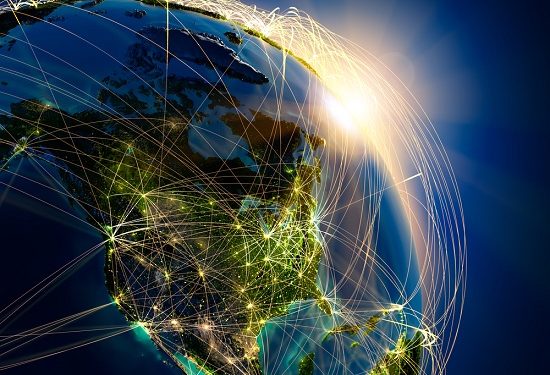 When people bring up the word “globalization,” it seems to be a contentious issue among many in the world. Many people think of cargo ships full of merchandise exchanging goods with one another; however, this already exists with global trade. Many people bring up issues of the past rather than how to compete in the future. The problem nations still face today is with tariffs, national deficits, and currency wars.

If you look at globalization now, it’s trending to become more digital. There is now a deeper network of connections between countries, where we still are at the early stages of this development, and we are in uncharted territory. However, today we will be going over more intricate details of how digital globalization is already changing our world.

Looking at the Current Measure of Globalization

If we look at how global trade has been measured over the last three decades based on the flow of goods, services, and finance based GDP. We can see that we have reached a stagnant area around 2007, when there was a global recession. However, during this period the global scene merely reorganized its information to have a higher standard of infrastructure, labor, and other dimensions.

Today, half of all goods delivered world-wide are digitally transmitted with 12% of Global GDP now in ecommerce. Everyday there is 3.5 billion Google searches, 152 million Skype calls, and 36 million items ordered from Amazon.com. Large portions of current data-flow are from across border movement, with the internet of things (IoT) expanding across the industrial sector. This is evident with companies like that of North American Production Sharing, which operates under the IMMEX program, helping to expand global partnerships of manufacturing into Mexico. With the IoT in play, they are utilizing sensors to be put in products that are tracked, which collects further data.

We also see that small and medium businesses are on digital online platforms expanding their global outlook. Looking at Facebook, they have around 50 million businesses on board, Alibaba has 10 plus million, and Amazon have two plus million.

Advanced economies tend to be more connected then emerging markets. Many technological advances have helped advanced economies give subsidized support to other nations in order for them to participate on a global scale. However, you have to ask yourself, what happens to the emerging markets on this digital globalization scale? Low-income countries that really didn’t participate on the old globalization scale now have to build a new digital infrastructure to keep up with other countries.

The world has this old fear of globalization in which most thought of it as a global conquest, but in reality, it’s not based upon that. It’s more a commerce outreach bringing both buyers and sellers together on a global scale through the means of digitalization. The world is changing so rapidly that within a blink of an eye, we will become a real global community without borders in this digital age.